World Wetlands Day is celebrated each February 2nd under the theme “Wetlands – sustaining life”. It was established in 1997 by the Convention on Wetlands and adopted by the United Nations General Assembly.

The purpose of this day is to be a driving force for wetlands, to raise public awareness and to inspire action on their behalf.

What is a wetland?

Wetlands are places where freshwater and salt water mix. They include swamps, wet meadows, bogs, lakes and ponds. They provide habitat for more than 80% of bird species in Europe and play an important role in regulating water, air and biodiversity.

The role of wetlands

Wetlands are important ecosystems for biodiversity and the maintenance of ecosystem services.

They play a role in the water cycle, they are able to retain and filter water, sometimes storing it for years and conserving biodiversity.

These spaces have a very important role for the animals and plants living here. For example, they have allowed the survival of mammal and bird species that live in wetlands in Eastern Europe.

Wetlands are an important element for the maintenance of biodiversity, air and water quality. Indeed, many bird species fly through wetlands to reach their destinations.

They are a very interesting source of information on the climate through time. Changes in temperature and humidity over time can be tracked through wetlands. They are extremely rich in biodiversity, which makes them very interesting for research.

With the current global warming, it has become more than essential to pay attention to the impact of all our actions because they are more destructive than we think.

Indeed, they are now threatened by urbanization, pollution and also by :

Urbanization is the main cause of wetlands destruction. These are often replaced by housing, infrastructure or green spaces.

This is why many municipalities are taking measures to protect these areas.

How to protect these areas?

They are protected by law and more particularly by the European Water Directive of July 23, 2009. This law recognizes their ecological value, their interest both scientifically and economically. This law also classifies them into different types according to their state and functions.

In addition to the actions of the government, each of us can, o nits own scale, protect these spaces through simple gestures, such as:

Wetlands on the French territory

The French territory has many wetlands such as :

High altitude wetlands: in the mountains and particularly in coniferous forests.

Salt marshes: on the coasts, they have a great ecological value thanks to their numerous animal and plant species.

Peat bogs: they are formed from the effluents of rivers, and more particularly from the clay that they carry. They have a high ecological value and a great biodiversity.

Puddles: they are made up of waste from industry, agriculture and breeding.

Residual marshes: they are formed on soils that have not been treated, when they are used for agriculture.

Ponds: they are the result of the alluviation of a river, for example, the Loire.

The marine peat bogs: on the coasts, they are made up of the same elements as the terrestrial peat bogs.

Ponds: they can be natural or artificial, and they are mainly used for agriculture.

Together, let’s preserve the French wetlands ! 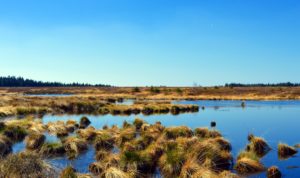