Each year we celebrate Mother Earth with a different theme, chosen by the Earth Day Network. This year we will campaign for  the planet under the theme: “Restore Our Earth”.  It is based on “the emerging concept that rejects the idea that our only options for saving the planet are to mitigate or adapt to impacts.”

This year, Earth Day will be marked by a significant event. Indeed, the Biden administration has decided to convene a global climate summit on April 22: Earth Day 2021.
This is an act that sends a very strong message: this summit will be historic and decisions will be made in the direction of restoring our planet.

The organization earthday.org has also set up, as every year, a full program for this day – including 3 days of climate action from April 20th to 22nd:

Earth Day will start with a global youth climate summit, led and organized by Earth Uprising (an organization of young activists to act together for the climate) and in collaboration with other youth organizations such as My Future My Voice or OneMillionsOfUs.

Followed by the virtual summit “We Shall Breathe” presented by Hip Hop Causus. This summit aims to “examine climate and environmental justice that links the climate crisis to issues of pollution, poverty, police brutality and pandemic.”

The multilingual virtual summit Teach for the Planet: Global Education Summit, led by Education International, will feature advocates from every continent on the critical role educators play in the fight against climate change across multiple time zones.

In addition to the United States of America, many other events (physical and digital) are being held around the world: 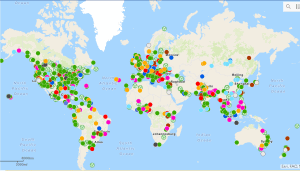 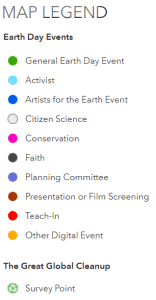 How can you contribute to Earth Day 2021?

Learn more about the different ways you can contribute to this year’s theme by visiting: https://www.earthday.org/ .

You will be able to check out their different campaigns, discover or rediscover the experience of volunteering with Earth Day or to make a donation to the Earth Day movement.

Together, let’s restore our earth!

Earthday.org is a non-profit organization born from the Earth Day Network movement. Its goals are based on mobilizing civil society for the planet through the implementation of civic-minded programs, in collaboration with partners from and outside the environmental movement.

Earthday.org has implemented programs such as:

Today, the Earth Day is the largest civic event on the planet with :

World Earth Day or Earth Day is an action for the planet born from an environmental movement in 1970.
The idea came from Gaylor Nelson, who was a U.S. Senator from Wisconsin at the time. It emerged after he witnessed the devastation of the 1969 oil spill in Barbara, California.

Based on the principles of the student anti-war movement, he launched an appeal to these same students with the aim of raising popular awareness about air and water pollution.

His objective: that the protection of the environment becomes a priority of the national policy.

On April 22nd, 1970, 20 million Americans take the streets, parks, and auditoriums to demonstrate in favor of policies for a healthier and more sustainable environment.

These environmental rallies had a vast impact on the population and allowed to gather under the same “flag”, Republicans and Democrats, rich and poor, city dwellers and farmers.

It was in 1990 that Earth Day went global, bringing together more than 200 million people in 141 countries thanks to Denis Hayes, leader of the Hearth Day movement at the time, who organized a major environmental campaign.

Earth Day 1990 had many positive impacts:

To find out about all the events on this special day: https://earthday.maps.arcgis.com/apps/opsdashboard/index.html#/8d15cc3da12d4338a109c7d64c97c02a